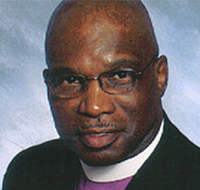 Kenneth Monroe began his life and ministry in the small town of Red Springs, NC. He received his elementary and secondary education from the public schools of Red Springs. He was baptized and became a member of the St. James African Methodist Episcopal Zion Church of Red Springs and was later called to preach at the age of seventeen.

Desiring to continue his education, he was encouraged and led to attend Livingstone College, Salisbury, NC. He received both the deacon and elders ordination by Bishop W. A. Hilliard in 1972 and 1974 respectively. Upon the completion of his undergraduate studies at Livingstone College and receiving the Bachelor of Arts Degree in Social Studies, he entered Duke University Divinity School, Durham, NC. In December 1976, he graduated from Duke University Divinity School with a Masters of Divinity Degree. Later in 2003, he received the Doctor of Ministry Degree, Project Title, “TRANSFORMING MISTRUST TO TRUST: DEVELOPING A NEW SYSTEM OF CHURCH FINANCIAL MANAGEMENT,” from Hartford Seminary, Hartford, CT.

In July 2004, he was elected the 95th Bishop in succession of the African Methodist Episcopal Zion Church. He was assigned the Western West Africa Episcopal District of the A. M. E. Zion Church located in the countries of Ghana, Togo, Liberia and Cote D’Ivoire (Ivory Coast). In December 2005, because of the death of the late Bishop Milton A. Williams, he was given the responsibility to supervise the Kentucky and Missouri Annual Conferences.

He is the third son of the late Paul and Hazel Monroe of Red Springs, NC. He has been married to the former Sheila Wells since May 24, 1975. They are the parents of three children: Erica L. Green (Kansas City, MO); Kevin J. Monroe (Kansas City, KS) and Adria N. Monroe (Charlotte, NC) and six grandchildren (Destiny, Amonde, Devin, Jayden, London, and Kamryn of all Kansas City, MO).